Dehumidifiers are useful in a variety of ways from maintaining the humidity in your crawl space to removing moisture from your house after a flood. Dehumidifiers are helpful to a variety ofpeople as well and sometimes even royals need a dehumidifier. This was proven by the restoration of Windsor Castle after a 1992 fire.

Construction on Windsor Castle started in 1070 in Windsor England. It is now Europe’s largest occupied castle. In November of 1992, rewiring work was being done at the castle. Then, at 11:33 am on November 20, a fire started at Queen Victoria’s Private Chapel on the first floor of the castle. It was later determined that the fire was caused by a 1000-watt spotlight was accidentally left on by a worker too close to a curtain.

The fire spread rapidly through the castle and soon reached Brunswick Tower, St. George’s Hall, and the private apartments in the Eastern wing. The Windsor Castle fire department, which included only 20 men, was quickly overwhelmed.

Luckily, many of the priceless works inside the castle had already been removed due to the rewiring work. However, as the fire spread, more art, antiques, and objects needed to be removed. All the people on site, including soldiers, ended up forming a human chain to remove as much as possible. Amazingly, only two works of art were lost, both of which were too large to remove on such short notice.

It ended up taking more than 15 hours to control the fire at Windsor with the help of 225 firefighters from 7 counties. Firefighters used 36 pumps to spray an estimated 1.5 million gallons of water. The fire destroyed 115 rooms, including 9 great state halls.

Restoration of the castle was a daunting process. The first step was to remove the debris, which ended up taking 7,000 garbage cans. Additionally, workers used 2,000 containers to salvage and categorize artifacts. Restoration came to a halt when it became apparent that the water used to put out the fire was still in the castle.

Probes were inserted into various points of the building to see how much was dissipating but unfortunately, the water wasn’t going anywhere. It was stuck beneath layers of plaster, paint, and paneling. Experts estimated that it would take 10 years for the castle to dry out on its own. 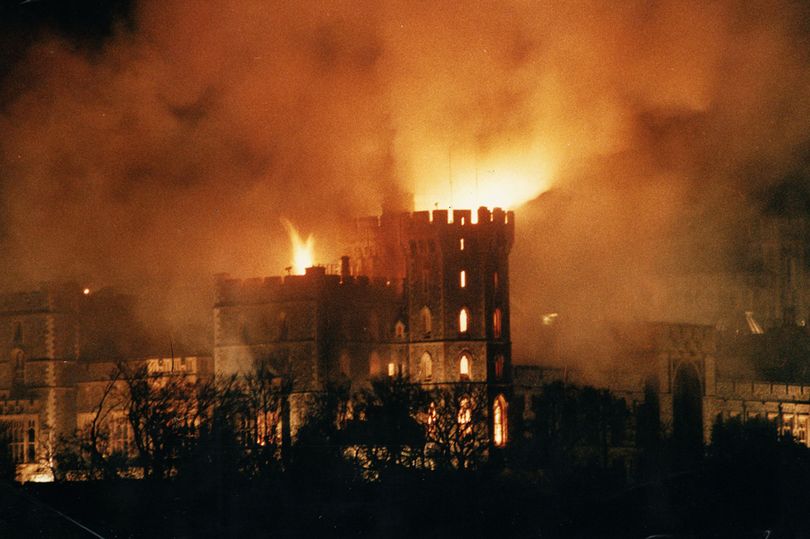 Waiting 10 years wasn’t a viable option so it was determined that something more proactive needed to be done. Restoration workers began carefully stripping back floors, timbers, and paneling to expose the woodwork and stonework beneath, which allowed them to dry more thoroughly. Industrial dehumidifiers were brought in to run 24 hours a day. Eventually a combination of dehumidifiers, ventilation, and air circulation was used to dry out the flooded castle.

Once the castle was finally dry, the actual restoration process could begin. At its peak, there were more than 5,000 people painstakingly completing the project. It took 5 years to complete the entire process but finally work was completed ahead of schedule and under budget.

The official completion date was November 20, 1997, the fiftieth wedding anniversary of Queen Elizabeth II and Prince Philip. The repair of Windsor Castle was one of the largest restorations ever attempted and it couldn’t have happened without the help of some dehumidifiers.

How Does Indoor Dampness Affect Your Health?

This site uses Akismet to reduce spam. Learn how your comment data is processed.